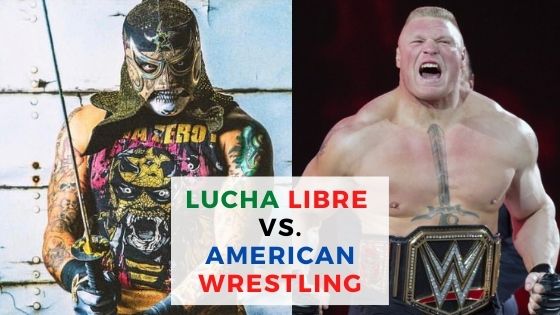 In this article, you will learn the main differences between Lucha Libre and American pro wrestling.

Before we get into the list of differences, first, understand what is lucha libre.

Lucha libre is the Mexican version of what Americans call professional wrestling. The literal translation of “lucha libre” is “free fight” or “free wrestling”.

A professional wrestler in Mexico is called Luchador.

While American wrestlers rely on size, Mexican luchadores rely more on speed to entertain the crowds.

The average American pro wrestler is generally taller and heavier, most US professional wrestlers weigh beyond 220 lbs.

Mexican luchadores tend to be shorter and lighter, their average height is generally less than 6ft tall, and the average weight is around 170 lbs.

Notice the speed and skills in this video

2. Americans are obsessed over big muscles

The first thing you learn when you go to a pro wrestling stable in the US is that you have to put on size.

For someone who wants to become a professional wrestler in the US, size is extremely important to entertain the masses. The ones who are not blessed genetically with a big body frame resort to steroids and other Performance Enhancing Drugs (PEDs) to put on muscle.

Things are different in lucha libre, the Mexican audience does not seem to prioritize big muscles, their main focus is performance, speed, and skills.

Luchadores don’t have the musculature that American wrestlers have. In fact, many stars of lucha libre are a bit fat and don’t have any visible abs.

This is a big one! Lucha libre relies heavily on flying techniques and acrobatics.

The top matches in lucha libre always include some kind of jaw-dropping flying techniques and dives.

Now, lucha libre has become a big source of inspiration to WWE stars, American pro wrestlers go all the way to Mexico to train with luchadores and learn from them.

It goes without saying that size plays a big role in why lucha libre has more acrobatics, luchadores, as explained above, are lighter and shorter.

If there is one thing the American crowds love the most, it is a good brawl!

In wrestling matches, Americans rely heavily on a brawling style where wild punches are exchanged, bodies are getting slammed on tables, heads are getting hit with chairs and hammers.

5. And of course the masks

Masks are a huge tradition in Lucha libre, although the tradition of luchadores wearing masks has started in the 1930s, it is deeply rooted in the Mexican culture.

In Lucha libre, the mask is the identity of the wrestler, if a wrestler loses their mask it means they have lost their identity. In fact, the greatest Mexican luchador of all times El Santo continued to wear his mask in real life even after his retirement, he was even buried wearing his mask.

Here is a video talking about the wrestler who never took off his mask, El Santo

Masks can be inspired from animals, gods, angels, demons, and other Mexican legends.

Also, removing someone else’s mask is the utmost insult a wrestler can receive.

There is a type of match called “Luchas de apuestas” translated to “matches with wagers” where wrestlers would challenge each other by putting their masks on the line, the loser gets their mask removed, which is a big humiliation in front of the audience.

With that being said, not all Mexican luchadores wear masks, there is a minority who made it to stardom without wearing masks.