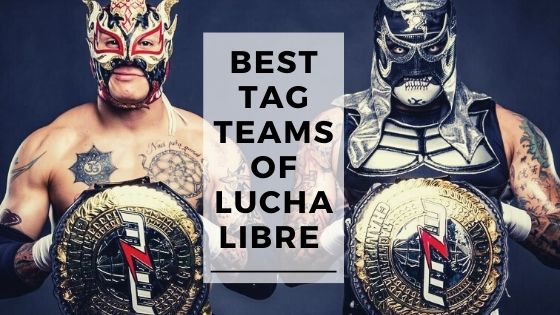 “The Rebels” (Los Rebeldes) a luchador tag team made up of Rene Guajardo and Karloff Lagarde, were two of the best singles Lucha Libre fighters in their respective weight classes.

Los Rebeldes later teamed up with Ray Mendoza against legends like El santo, Rayo de Jalisco and some other great Luchadores.

The saint (El Santo) began teaming up with Gori Guerrero, father of the late Eddie Guerrero in the late 1940s, the atomic couple showed their incredible in-ring abilities by vanquishing every single team that was put in front of them, through this victorious run they faced teams featured Tarzan Lopez, Jack O’Brien and some other top performers.

The team possessed an amazing brawler in El Santo and a technical fighter in Gori Guerrero.

La Pareja Atomica took over the EMLL circuit and they had matches that are legendary to this day against Los Hermanos Shadow.

Los Hermanos shadows delivered some of the most amazing matches against the likes of El Santo and Gori Guerrero, Los Hermanos Shadow became National Tag Team champions in Mexico.

Similar to a lot of Lucha Libre tag teams both the Black Shadow and the Blue demon were accomplished singles wrestlers before becoming a group, both wrestlers were seen as the torchbearers for the evolution created by El Santo in the Mexican wrestling circuit.

La Ola Blanca rose to fame as a group with the team of Dr Wagner and Angel Blanco who teamed up in the early 1950s as a Rudo tag team.

Dr Wagner and Angel Blanco quickly became fierce rivals to El Santo and Rayo de Jalisco who were the Arena Tag-Team champions at the time.

The team enjoyed a lot of success in the Tag Team division-clinching the illustrious National Tag team and the NWA Americas Tag team titles, then they welcomed El Solitario as a new member to form a trio that is spoken of through the ages.

Sadly, the great run ended in tragedy as both members of La Ola Blanca were involved in a terrible accident leaving Dr Wagner wheelchair ridden for the remainder of his life and Angel Blanco deceased.

The saying some friends stick closer than family is a full show between Jose Eusebio Vazquez Bernal (Espanto I) and Fernando Cisneros Carillo (Espanto II) who were childhood friends from their little town Torreon with a dream of becoming professional wrestlers.

Armed with their dreams the two friends began their journey to becoming professional wrestlers.

Both men garnered success in the business quickly and formed Los Hermanos Espanto, their debut in EMLL came shortly after, Los Hermanos Espanto (I &II) went on an incredible 34 matches winning run on the less popular Tuesday shows which bumped them up to the Friday that established them as one of the top Tag teams.

Like most tag teams with success on their side, they welcomed a new member to the team Jose’s brother Miguel Vazquez Bernal (Espanto III).

Los Hermanos Espanto team was together for 8 years until the painful death of Jose Eusebio Vazquez Bernal (Espanto I).

Ray Bucanero and Ultimo Guerrero were the most formidable Lucha partnerships in the 2000s, they went on to join forces with El Satanico.

The trio showed fluidity and Understanding through their matches that only a few teams could match, they proved their worth after being named Mexican Tag team of the year.

Ray Bucanero and Ultimo Guerrero became the CMLL tag team champions in the summer of 2004 although they lost those titles after they ended their careers as 4-time CMLL Tag team champions.

King of the “Viva la Rasa” movement Eddy Guerrero and “Love Machine” Art Barr teamed up as La Pareja del Terror, although they had quite a short stint as a tag team Eddie and Art influenced the Lucha Libre movement.

The team brought elements that they had accrued over their time in the U.S, their charisma and top tier in-ring abilities shone through and made them a fan favourite throughout the Mexican professional wrestling industry.

They had some amazing matches against the son of another legend in El Hijo del Santo and Octagon like the classic Hair vs Mask match on the 6th of November 1994.

El Hijo del Santo, Son of the great El Santo was part of some promoters’ schemes to recreate La Pareja Atomica and was teamed up with Eddy Guerrero son of Giro Guerrero severally, but the team lacked the chemistry that their fathers possessed and eventually promoters gave up on the dream.

El Hijo del Santo would later align himself with Negro Casas who at the time was his greatest rival, they had been at war with themselves for close to a decade until circumstances forced them to battle as a team and they never looked back after that winning the CMLL tag team champions 3 times.

Former members of the Los Misioneros de la Muerte, Silver King and El Texano decided to break out and form the Los Cowboys when they joined the EMLL.

After Silver King and El Texano became a team they enjoyed success in various promotions from the UWA, WWA, CMLL and other promotions in Japan, Los Cowboys had some of the greatest rivalries against Tag teams like the Can-Am express, the most memorable match between them being the double hair and mask stipulation fight on the 12th of July 1992.

Fernx and Pentagon are the new eras of Luchadore tag teams but they didn’t start as a team, some of their best displays were against each other in Mexican promotions.

Fenix and Pentagon became a team when they both joined promotions in the United States, the brothers have already struck gold in several promotions like Impact wrestling, PWG, MLW to mention a few.

The Lucha Bros are the torchbearers for the high risk flying high impact and technical ability, and they have stellar matches that show those skills off, they have won several tag teams titles and they look like they’re not ready to stop picking up championships