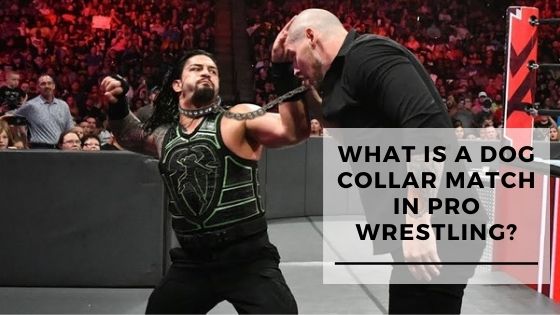 In this article, you will learn:

What is a dog collar match in pro wrestling?

In a dog collar match, wrestlers remain joined to each other through leather collars, usually a couple of meters long, to each other’s necks, and for the entire fight.

In most cases, any detachments will lead to a match disqualification.

The chains or ropes connecting opponents are perfectly legal to use during the entire match, and for this reason, sometimes dog collar matches end in a lot of blood.

How does a pro wrestler win a dog collar match?

What does a dog collar match entail?

Wrestlers are allowed to use the chains in their most preferred styles.

Therefore, an opponent can whip another wrestler, wrap the chains around their necks or fists to hit the other wrestler or pass the chain between their opponent’s legs to subdue them.

How did the dog collar match come into existence?

The first dog collar match on television was the match between Greg Valentine and Roddy Piper. This match happened during the Starrcade event in 1983.

However, before that, there was a recorded dog collar match. This fight was the first of its kind, in 1979, where Killer Brooks went head to head against Johnny Boyd.

How can I differentiate a dog collar match from other match types?

In a strap match, opponents fight while attached to the arms or feet using chains, ropes, or ordinary belts. The heel to heel is an example of a strap match.
Short leashes

Wrestlers are tied together using short ropes or leashes, and the winner emerges through either submission or knockout.

This match type is more or the same as a strap match because opponents can fight when chained anywhere but the neck.

In chained fury matches, match officials remove all turnbuckle pads on the four-ring corners before the fight.

In this match type, opponents can either get chained around the wrists or the neck.

Opponents are allowed to use the restraints to choke other wrestlers. However, a wrestler cannot win via submission.

The only way to win a Texas Bullrope match is by touching the top of each turnbuckle at the four-ring corners in subsequent succession or through a pinfall.